February 03, 2017
It's  always good to share a Friday with you and today I'm talking Smart, pants and quite frankly stupid.....no difference there then?
When I first stumbled onto a site for vibrating pants my initial response was to panic and hit the back button, but an image of a pair of jeans fueled my curiosity. Turns out French Company Spinalli  Design have recently revealed their collection of Essential Smart Vibrating Jeans that act as a Sat Nav.


They have built in sensors on either side so you connect up to your  Smart phone, turn on the GPS and the Jeans vibrate to tell you to turn left, right or go straight on. If you go the wrong way both sensors vibrate at the same time. 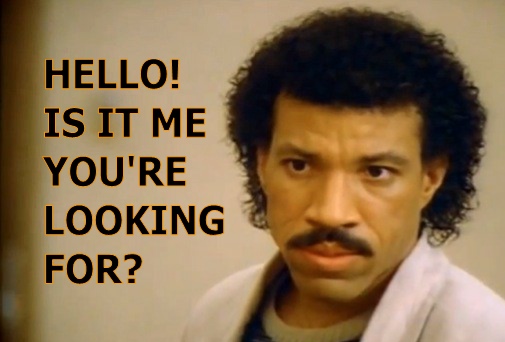 As someone who gets lost going to the bathroom in my own home I fear my butt would be on constant shake?  I'm baffled at why they are only being marketed for women?  unless of course the designer is a man hacked off at his wifes inability to read a map? The jeans come in a variety of designs ranging from $76-$250 & can be purchased from their website.

Staying on vibrating pants, Wearablex have created Nadi X high tech yoga pants that vibrate to help you into the correct pose. They have tiny sensors woven between the thread that communicate with each other to determine where your body parts are. Once in a pose, the sensors report back to the App on your phone, if you're misaligned you'll feel subtle vibrations in the relevant body part you need to move, ooh, er. 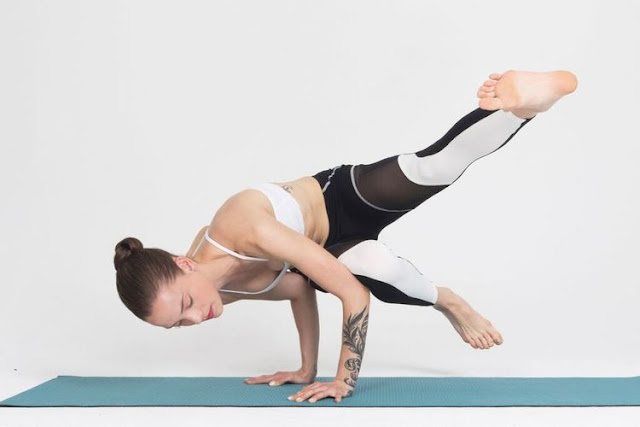 Launching anytime soon, it's been reported that they can only survive approx 25 washes, which if true means either costly replacements or being a stinky yogi? Certainly an interesting one to watch though. No price as yet.

Ladies, With Valentines day just around the corner here's the perfect present for your boo...oh okay, it just appealed to my juvenile humour, it's a Man Bib for storing snacks, leaving both hands free for?.... well more snacks of course. It's £9.95 available from Genie gadgets 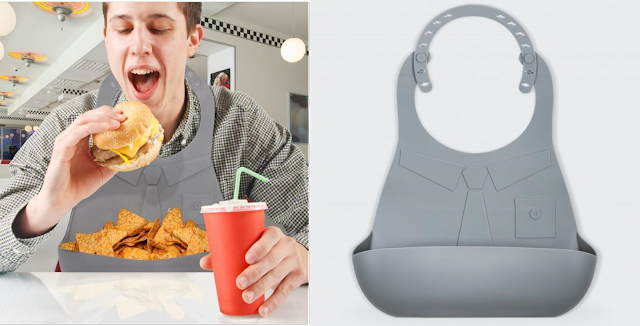 And guys if you're not smart enough to remember Valentines day your life will be pants you know it? You can't go wrong with a bit of chocolate, especially if it comes on a heart shape stand and you go to the trouble of placing 82 individual Ferrero Rocher on it , Yes, that's how many this baby can hold. The stand minus Choc is from Ebay £18.95

And lastly for either sex this smartphone magnifier in the shape of a retro TV with 8" screen, just slot your phone into the back, & watch videos/movies at twice the size. In a sale right now £12.99  from Totally Funky

Smartphones, tablets or laptops are an essential part of an ME patient’s life nowadays – overcoming the isolation and lack of research/treatment which exist for people with ME. The fantastic Let’s Do It For ME team have achieved all of their work using smartphones or IPads.

As part of the development of the UK Centre of Excellence for ME (#CofEforME) the charity has already had discussions to implement trials of telemedicine features – using current and developing technologies which can provide real-time, seamless integration of personal health data into the healthcare systems and research databases. These can be an essential part of new age healthcare – allowing monitoring and measurement of health profiles that can link to central databases used for research. 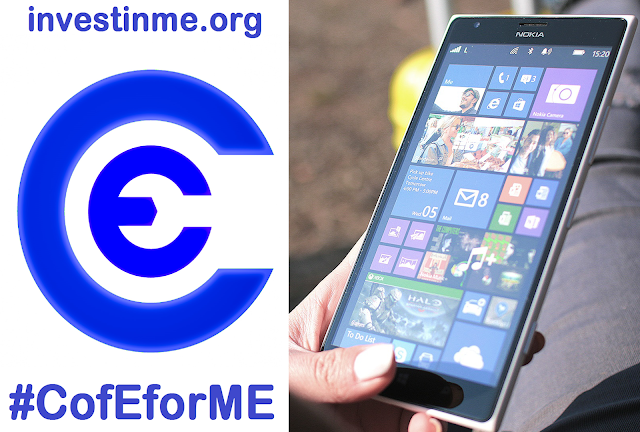 In our international conference several years ago, Dr Andreas Kogelnik presented new thinking on using devices for linking patients and doctors to allow direct engagement in research, and enable longitudinal clinical and biological sampling with low cost infrastructure for research/trials

Professor Ron Davis spoke at our IIMEC11 conference of the development of new smart gadgets for monitoring and measuring ME patient details, at a fraction of the cost that would be involved if it were being developed through normal industry channels.

In addition, the charity has been talking to a company about using a device to overcome the isolation experienced by young ME patients - caused by society ignoring this disease.
Smart gadgets were even discussed in our rituximab workshop last week in the Norwich Research Park when the Norwegian Haukeland team visited. In addition, that brings us nicely in to one last thought.


For all the technology in the world it still often come down to individuals to make a difference, to make things happen.
Last week, at the #CofEforME in Norwich, it was a pleasure to host a group of fine Norwegian researchers whose dedication, professionalism, skills and empathy for patients was clearly seen.


Things have come a long way since the Vikings landed on UK shores. 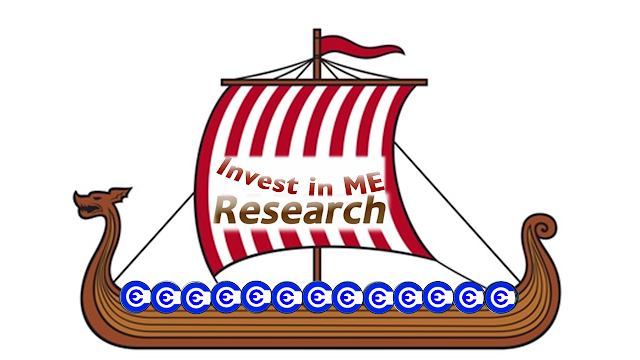 Now we welcome our Norwegian friends as they help us develop a rituximab trial and collaborate on other research into ME.  Nowegian-UK research into ME? Now that is smart.

With every word comes various stories of origin & the word "Pants" is no different. It's said that in the  3rd century a christian doctor was condemned to death by the Romans for helping poor people, but survived six attempts of beheading. They eventually gave up and he was later made a canon by the church and given the name "St Pantaleon" Pan-greek for  "All" &  Leo for "Lion" to recognize his courage. Many boys born after this were given his name.

Around 800 CE a young man playing the fool in a comic drama was named Pantaleon, the actor wore breeches that ballooned out at the knee.By the 1800 century they were worn by most men and known as Pantaloons. By the 1840's the word had been shortened to Pants, but the term Pantaloon was still used for describing a womens undergarment worn under a large hooped skirt. So now you know?

It's always exciting  when you hear an Unsigned artist for the first time and you get that warm N fuzzy in ya belly like you know its special, and that's just how I felt on hearing urban artist D-Rymez. 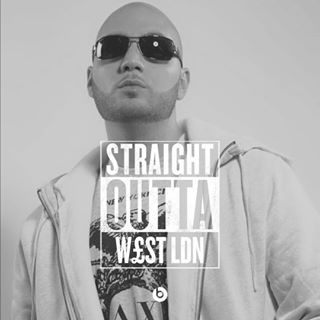 Raised in West London, he doesn't just dream big, his making it happen, working with a variety of topnotch producers & film makers his Terminal 1:Gate 24 Mixtape  released  last year has a thread of different genres weaving through it, but the final tapestry is one of truth, the journey of a young mans life thus far, and the future for this artist is looking golden.
You can purchase tracks and read more about
D-Rymez  on his Website.


Launching on the 23rd Feb is new album "Long Lost Home" by folk songstress Daria Kulesh & it's a wonderful array of true tales from her Russian & Ingush
roots. In the CD booklet you learn the wonderful story behind each song.

If I had to sum Daria up in one word it would be passionate, I've been fortunate to catch her live and it's evident that she's immensely passionate about life and every minuscule part of the songwriting/recording journey from lyrics on "Safetly wed" such as "Auntie Nina was white as milk, smooth as silk, calm & poised" to the multi instruments that she plays.

And on  "Untangle my bones" you're immediately reeled in by a guitar riff  that has you tapping your foot and nodding your head from the off  before she slips into lyrics " Untangle my bones, set them alight, love me into being"  It's like being taken on a musical magical mystery tour of her ancestry. You can buy tickets for the live launch which I'd highly recommend & also pre order the CD on her website


Well that's it for another fortnight
See you back here 17th Feb, Til then...
Stay Blessed,
Back Before Elvis X