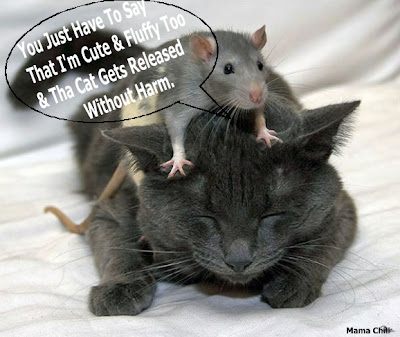 If you walked into a room full of people holding a pussycat, you would pretty much expect an automatic response of ooohs and aaaaahs, I’d go further to say there would be a majority of those that wanted a stroke and those that wanted a hold because most of us are familiar with cats, and even if we don’t own one we pretty much have an understanding of a cat, it’s rare that tha presence of one provokes a negative response.
(Unless its sh*tting on my lawn of course in which case I automatically  wave my arms about & bang on tha window shouting out incoherent ranty stuff like a demented woman)

Now rewind and go back into that room holding a rat, and I would guarantee you the automatic response would be eeeeeeugh, shudders, and “keep that thing away from me”

Tha automatic response has come from what we’ve been fed throughout tha years via history & media, It’s fed to us in a way that’s caused scaremongering and prejudice. Many people associate cat =nice, rat =bad, & its always going to be hard to change that. Where am I going with this you may ask?........

Well unfortunatley M.E is tha rat of tha illness world, its not seen as a fluffy, or cute, or popular, tha majority of people I’ve come across are quite defensive almost frightened by it, while others are apprehensive and inquisitive , either way it doesn’t bode well for us does it?

Most people associate rats with the bubonic plague which conjures up a dirty, diseased, unacceptable image . Tha mere mention of tha word “rat” often promotes a negative response as does tha mention of M.E.  Infact we have quite a lot of similarities when all said and done. M.E has always been shrouded in tha “what came first, tha physical or tha psychological debacle” .

We as sufferers know without doubt it’s only through living with tha physical symptons that we ended up with psychological problems, that is normal with any longterm illness, and yet you don’t hear that questioned with any other illness, just M.E. I’ve had many a conversation with people where they’ve said “ah, yes but it’s one of those, what came first the chicken or the egg scenarios isn’t it?” In many cases I’m left feeling guilty, as if I’m to blame somehow for my own illness.

When someone tells me they have heart problems, I wouldn’t dream of saying “hey maybe you didn’t clean your teeth properly, you know, it’s a fact that not getting in-between those gaps can do some damage you know?”

And yet people find it acceptable and ok to tell us that while our symptoms maybe real our illness is actually all in our head? Based on???????????? …yep, wrong facts, scaremongering and crap journalistic content that seems to have gone on throughout history. 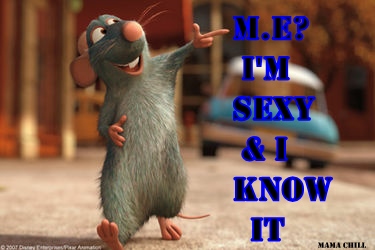 Our illness has long been surrounded by controversy, misunderstandings & blame. Celebrities are happy to come out in their droves for a fluffy illness, but how many would stand up for M.E? My requests have always fallen on deaf ears, I’ve never even had a response. When it comes to fundraising people seem quite happy to put their hand in their pockets for a fluffy illness but not for M.E. They’re always going to save tha cat sanctuary over tha rat sanctuary.

I even checked in yesterday to see how my own efforts at fundraising for Invest In M.E was doing, & from last july 2011 when tha M.E track “I cant stand tha rain” was released to September 2012 it’s had 8 downloads at 79p and some streams at various prices & made a total of $8.20  & yes that’s in dollars so in UK terms that’s just over £5. That’s despite all tha paid advertising that I’ve done for it and promoting and tha promoting that a very good friend has done on a daily basis to support tha cause & one of those eight downloads was me  because I was trying to lead by example.

Theres always going to be a million and one excuses but tha bottom line is sometimes we have to make sacrifices and actually stand behind our words if somethings important enough, most of us are in tha same poor financial situation, but if rats cant even support their fellow rats then how do we expect to entice those who prefer a fluffy illness to part with their cash if we’re not prepared to do it ourselves?

I’m quite happy to bear similarities with a rat, you see they are lovin and loyal companions that thrive with human affection, they are extremely intelligent & can be taught to come by name, they are also extremely tough, they can be dropped from tha fifth floor of a block of flats and survive
( Not that I’m aiming to follow suit, although there are times when theres temptation to throw myself off tha nearest balcony due to peoples overwhelming ignorance)

Rats can overcome just about anything by biting through it, and as M.E sufferers we too do a pretty good job of dealing with & overcoming everything that’s thrown at us. I just wish we were also allowed to use our teeth as I can think of a few politicians, doctors, scientists pyschologists and journalists I’d like to sink mine into. 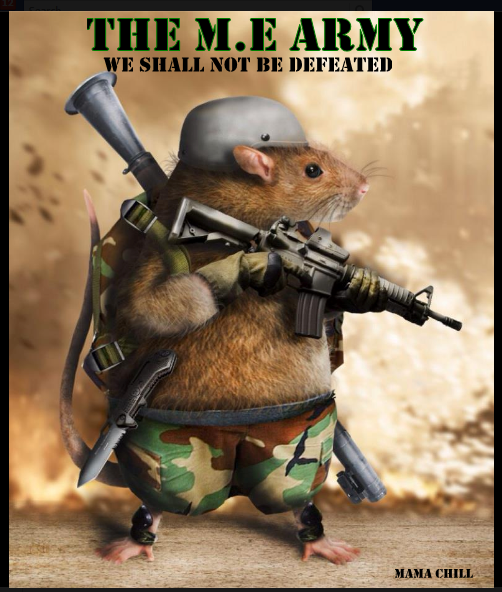