Who Tha Hell Are You?


Many moons ago, I recorded a home demo called “Who tha hell are you?” it was basically me directing  tha question to tha illness M.E, because I try to see it as sumthin outside of me, infront of me almost,  rather than an actual part of me. I try to encourage  others with illness to do this too because if you attach tha illness to you then you often become tha illness and you also attach blame, and with blame comes guilt and a whole lotta other problems.

M.E isn’t your fault, you cant help feeling tha way you do, you didn’t ask for it, you don’t want it, M.E is to blame for how you feel, NOT you……you wouldn’t normally feel tha way you do, you wouldn’t normally live tha way you do if it wasn’t for M.E, So by seein it as sumthin separate from yourself, infront of you to talk at, be angry with etc, you separate blame from yourself, and keep tha illness infront of you rather than an actual part of you body N soul …is this making sense?  lol!

Anyhow After directing tha question to M.E I started to think it migh apply to me too. There have been a couple of occasions I’ve looked in tha mirror and asked just that “Who tha hell are you?” . Before M.E came along I pretty much knew who I was & where I was going, but now I’m not so sure….how do I know what I would have been doing or where I’d be, or what I should be doing??????? Anyone got tha manual? LOL!

I was one of tha first unfortunates to go on tha pilot NHS M.E support scheme  not sure exactly when, other than a very long time ago, I say unfortunate because I waited two years on a waiting list for it to start as it kept being delayed due to lack of funding and when it did finally get going at St albans hospital the staff were voluntary due to???? ….yep… lack of funding and what was offered was nuthin more than a load of  pyscho babble to make us more  “aware”  ( By that point I’d lived with M.E for at least 10 yrs 24/7 how more aware did they want me to be? )

A trainee psychologist asked what I thought I would be doing if I didn’t have M.E & without thinking I replied “ Working,  getting a music career, playing pool down tha pub with my friends…er…clubbing N dancing etc”

And she said “ No, that’s what you would have been doing back then, I’m talking about NOW”

So still not sure what I was saying that was so wrong I repeated what I’d said before “Working, getting a music career etc etc”.

And she said “No, you’re falling into tha trap most people with illness do, you’re stuck back there, but life has moved on, your friends are probably at Uni, or married, got kids, got mortgages, and moved on by now….so that’s why I’m askin what you would be doing NOW?”

Maybe it was me but at that point she’d lost me and got me totally headf**ked…I still didn’t see tha problem with what I’d originally said, but then I had to go home and look in tha mirror, and admittedly I wasn’t sure who I was anymore….what if she was right, what if everything  I’d said was a past life thing I’d just hung on to?...... that’s tha only life I’d ever known, how was I supposed to know a different life I might have been livin if I’d never lived it……..And YOU’RE confused?.....think how I felt LOL!

Today I’m a lot more comfortable in my skin but I still believe that I and many other M.E sufferers wear a mask most of tha time, not by choice but by necessity, a little unsure of who we really are anymore .  My life was in full musical SHWIIIIIING! When someone smacked tha pause button on my Boombox and that’s where I’ve been trapped ever since…… within a bubble, suspended in Limbo, while tha world goes on around me and tha only way to survive is to put on different masks according to what I think tha people passing by my bubble need from me.

Tha “I’m Fine” mask  is tha most common one of course but  in  reality its an M.E mask that hides tha whole truth, concealing our pain, tha daily struggles, who we might’ve been, where we might’ve been, and tha fact that sometimes we look in tha mirror & think “Who tha hell are You?” 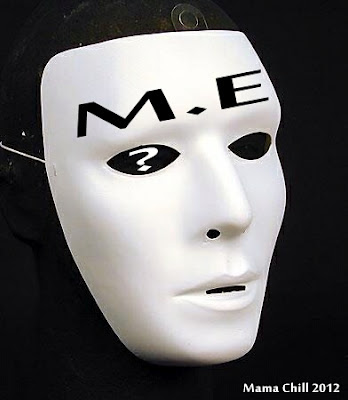