After the sad news broke that Jack Osbourne had M.S, the  social networking sites were awash with shared news articles, and words of sympathy and one of our Facebook friends had written “wish it could have been M.E” not that they wished any kinda illness on Jack or anyone else for that matter, they were just saying what a lot of us M.E sufferers were probably thinking.

The amount of publicity and celebrity support has been, and is going to be enormous, a publicity and support we could so do with in the M.E world, BUT…..yes, theres that word again, the infamous but…..i firmly believe that if Jack Osbourne had been diagnosed with M.E instead of M.S there wouldn’t have  been any media frenzy, there woudn’t be an interview in OK magazine, it wouldn’t of been splashed across the front of the national newspapers and it wouldn't have been on every news channel going, and the reason for this is, if he had been diagnosed with M.E instead of M.S I believe he wouldn’t of announced it, and like a lot of celebrities before him and all the ones with M.E still out there, they would keep it secret.

Lets face it, as far as impact goes M.S is up there with cancer, arthritis & heart disease etc not only in the medical profession but also on the ground amongst the general public. People may not know the technicalities of the illness or what its about but they  automatically know M.S is a serious condition, its something people accept. M.E however is still the freak show of the circus, nobody seems to quite know what it is. When told I have M.E most peoples reaction is to think I mean M.S, and during them telling me the story of how some relative or close friend has the same  thing I interrupt to correct them and repeat its M.E , to which the reply is often “Whats that then?” or “ Isn’t that, that yuppie flu thing from the 80’s”.

For those with M.E the announcement and publicity surrounding Jack Osbourne is heartbreaking, not just because he has a terrible illness but because  M.S & M.E are so extremely close in symptoms and yet worlds apart in acceptance & treatment. We can only continue to watch from the sidelines and hope that one day the world will accept our illness as the terrible one it is, that the media will want to publicise it and celebrities will want to support us. Its hard to understand how two illnesses so similar can be treated so differently, or indifferently in our case. The doctors talk about M.E and Fibromyalgia possibly being one and the same illness, but how do we know that M.S and M.E aren’t  the same illness?

How many people with M.E have ever been tested for M.S, in the 21 yrs of living with M.E whenever I’ve  mentioned this to the doctors I’m just told I haven’t got it…that’s it.  Many years before my M.E diagnosis and only due to my persistence I was once sent to see a neurologist in London, who got me to walk six steps in a line,  & then  asked me to lie on a bed and mimic hyperventilation, when I became exhausted I asked to stop, then I was asked how I felt, and of course I replied dizzy and exhausted. His diagnosis was I needed to go on a course to be taught how to breathe properly and it was this that was causing all my symptoms, unsurprisingly enough I rejected his diagnosis and went home disappointed and despondent once again.
But I’ve lost count of how many people with M.E have said to me “I sometimes wonder if I have M.S”  but have never been tested. I often wonder if there will eventually be a link between the two illnesses. But Until somebody somewhere is prepared to start actually doing something, those of us with M.E will just have to keep battling to get the equality the illness deserves. Back Before Elvis, Stay Blessed XXX 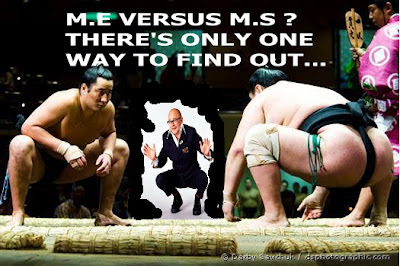